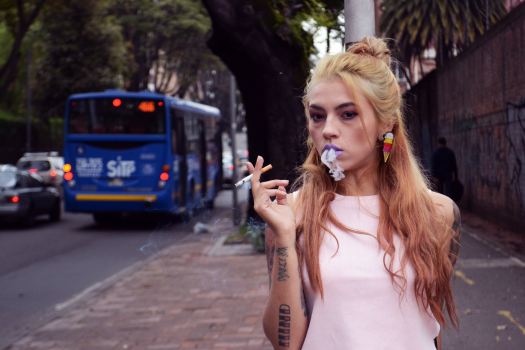 I’m not sure it’s an emergency but then again I’m not sure how I got here so who’s to say when the urgency sets in. Can a person slowly slide toward their own demise without ever actually seeing it coming? Doesn’t matter. Across the street, a woman has placed a blessed mother statue in her front window facing outwards with palms raised and eyes cast downward. I’d say she’s done it as some sort of ritual prayer for good weather but she did it so many years ago now it’s hard to tell if it’s worked out as she’d hoped or not. It’s funny to me what people believe in, or I should say it used to be funny until it started becoming more and more absurd.  I am not a believer in much of anything but I do read tarot now and again and it stirs something in me, could be the idea of witches and magic, could be the pleasure of escape from the everyday world with its pragmatism and general low grade misery. I don’t think you need to believe, I think you just need to be open to making up your own story the way you want to. On the drive home, I passed the odd shaped one-level building tucked under tall pine trees back along a gravel road off the highway. It’s dark and seedy, the muddy color of wet bark and indignity. Used to be a sex shop but now it’s a kids day care center, made only slightly less grim by the cardboard cutouts of smiling red, blue, and yellow dancing crayons in the small front window. How much we endure between then and now. The grown ups I see, I can’t help but wonder what the hell they are thinking, or if they even think at all. So many random lives on autopilot, bodies and dreams on medication. How do they keep it all together and why do they try so hard to impress each other. And why does it always feel like I’m not one of them. Not even close. The more they want to make me like them the more I retreat. The more they reach for the outer signs of success the more I want to scream. There is a tangerine streak of cloud falling from the tail of a plane running jagged across the evening sky. It looks like lightening stood still and turning soft at its edges. The house creaks as evening falls in and I wonder why any one tells the story of anything. Why anyone who gives a damn about this life speaks what is untrue so often it becomes everyone else’s reality. I pour the wine and wonder why any one of us speaks at all.

One Reply to “Break Glass In Case of Emergency”