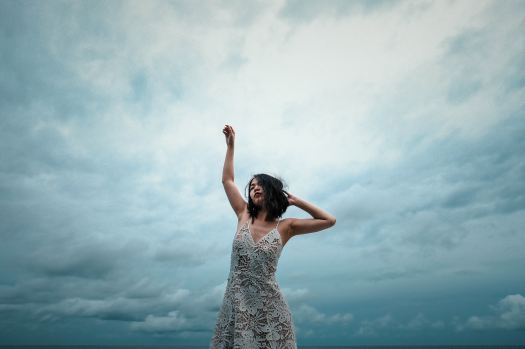 As I walk home bundled up to my eyelashes in hat, scarf, wool coat, mittens and the whole works, the snow which had been falling swift and heavy since noon begins to change to an icy rain. I can hear it as it lands in thick chunks on the pavement, the smell of spiced wood and wet winter in the air. The bare inky trees seem to turn even darker still as they stand erect and immobile, the freezing coating coming down like a gray mood which seeps into your skin and sort of sloshes around in your veins. Inside my bones there are a thousand tiny question marks swirling around like minnows, making little mosaic designs with their quivering hyper bodies, kaleidoscopes of all the things within me which remain unresolved, undecided, agitated but with nowhere to go so they morph and shape shift into images of lust and love, war and cruelty, passion, hope, despair. Back at home I’m peeling off the wetness in soaked layers. I open a bottle of buttery white wine and run a bath to warm my chattering body, hoping it will also soothe my jittery obsessive mind. Closing the bathroom door so the steam begins to fog the mirror, I stand naked while piling my damp waves of blond hair up in a mess atop my head. Even though I’m pale and my eyes are little puffs of fading blue, I like what I see so I lean a bit closer and trace a small heart in the mist on the glass with my finger. Taking a swallow right from the bottle because I’ve broken so many a glass in the tub before I’ve learned my lesson, not to stop drinking but to stop being so quaint about it, apparently, it dawns on me that the year is coming quickly to a close within a matter of days. Not only a year will have passed, but an entire decade in fact, and I try to feel something special about that but nothing much surfaces.  I am not convinced we are moving forward into greatness but rather backwards into a scorching apocalyptic demise and each and everyday it seems something happens to prove my theory spot on if not also advancing at a speed neither I nor many others could have predicted. What does still surprise me is people’s ignorance, their refusal to tell the truth about what is happening right before their very eyes, but maybe it shouldn’t. Maybe I should know better by now for I’ve seen four decades through after all. Stepping into the hot water and sinking down low, my body relaxes deeper than it has in weeks and for a moment my mind is sweetly suffocated into silence by the scent of the milky lavender heat. I’ve tried to follow the call of my melancholy soul, that much I can say for certain at least. I’ve a collection of erotica I’m working on which is a more beautiful and more difficult endeavor to produce than I thought it would be. This is what keeps me going, the words. Thinking back on how I’ve spent my days and nights, the loved ones I’ve lost and the ones who are still around, I am touched with a hint of nostalgia for the years when this season meant magic, wonder, enchantment. How we have traded it all away for a game there is no way to win, and no way to stop playing until it’s all over for good. We posture and we pose and we pretend and we throw tinsel and down champagne as the stars pierce the skies with their dead light. Then we go home to burn our listlessness into the ground any way we know how. They tell you it could be easier but it’s not because you pay attention. If there is a God, it must feel our sadness, too, if it has any kind of heart.