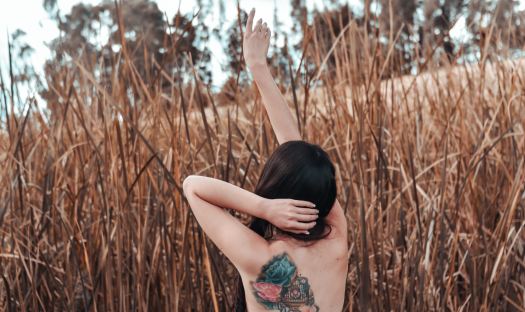 There are millions chasing but few will ever grab the brass ring. She has full breasts and flawless skin but she is far from flawless. Riddled with self-loathing and the feeling that some kind of tiny insects are breeding at lightening speed and crawling underneath her veins, she smiles and keeps it all inside. She’s so pretty they take her picture for hours on end, make her frolic in the frozen ocean in the coldest winter on record as she wears a bikini and her hips are numb and her lips are blue as the razor sharp sky overhead which is a blank stare, offering no comfort and no relief. As I imagine all the models all across the world who have been humiliated just for show, I wonder why so many of us are willing to go so far for attention and why the rest of us care to see it play out in as many gruesome scenes. Is it sad or fascinating. The flashing lights and recognition, is it currency or oppression and are they different things. I once watched a TV show where a beautiful young girl posed for the camera while holding a tarantula inside her wide open ruby red mouth. And as the hairy thing crawled even further toward the back of her throat she didn’t even flinch, whereas I, observing from the comfort of my couch in my humble second floor apartment, began to gag and had to leave the room. I’m fairly certain it was around that time I stopped watching cable television. We share whisky and cigarettes and embarrassing secrets about ourselves late at night while wrapped up in each others arms. We push each other down and inflict bite marks which turn to bruises we then lick and kiss as we fuck with abandon until dawn. When you want it soft I’m distant and when I want it hard you disappear but every once in a while there are sensations which electrify every nerve and could never be described in mere words on a listless page. There are card tricks and magic shows, sleight of hand and lovers severed in half and all the while we wander this circus turning over stones in the hopes of finding anything worth believing in, worth pulling close to our chest and holding on to if for no other reason than to keep from drifting off into a state of permanent isolated melancholy. But truth be told I’m more curious about the ones who hide in shadows and pursue a strange light which burns only within themselves. The ones who cannot find the words but can make your body sing as though come back to life. I don’t want answers and I don’t need one more person telling me how to live my best life. I’ve rarely been one for romance but then again maybe that’s what I’ve been missing all my life. Read me a poem that tears me into a thousand pieces of myself I didn’t even know I possessed. Tell me about the way when she knelt before you and looked up at you with those wet hungry eyes you were certain this here before you was god herself in the naked body of an angel come to earth to spread herself only for you. There are some things we cannot bear to swallow, only write about. There are some things we cannot say no matter how hard we try because something in us is not ready. Will never be ready. And as we dangle our little feet over the gaping precipice, we want nothing more than to leap but something always holds us back.