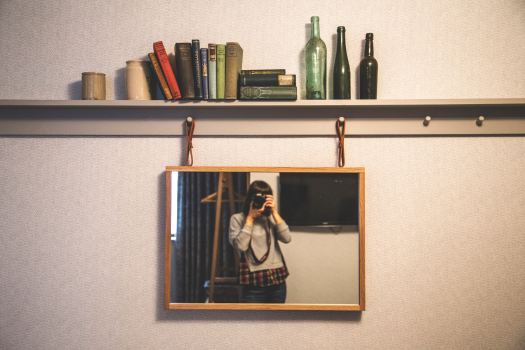 For the most part, I’m unmoved. Walking together beneath the dead trees which line the street, he’s going on about something that matters even less than a little bit but such is the regular stuff of regular people who are afraid of any other way. Tell me what you write about, tell me what you see, I ask him in an even tone to let him know I’m not fucking around at all, I’m not patronizing like most people do when you tell them you’re a writer, no. I most sincerely want to know, because people write about the things they don’t know how to say, and the things we don’t know how to say are the most interesting. We are voyeuristic, we want to peek behind the curtain, but through a secret window so that we can see them undressing but they can’t see us. So that we can pretend we are in control of our perversions and not the other way around. Ducking out of the rain and into a dimly lit bar just west of the center of town, we order drinks as his eyes change. The way he leans closer to me tells me he has decided to trust me with those thoughts he holds deep within his soul. As he opens up, I listen with my entire body and mind to each and every single word he lets drop like jewels from his deviant tongue. He’s a dirty one for sure, but when he homes in on a subject he’s a fiercely quick study and a razor sharp wit. He writes about sex with women who submit themselves to his every command. They are beautiful and they are his and he makes them say it out loud while naked and blindfolded. He writes about the end of the world and laughing into the face of insanity while the forests and buildings all go up in flames. Destruction is resurrection and suffering a random misfortune in a mostly uncaring universe. He once wrote a piece so graphically horrific that he lost a good lot of even his most devoted fans but that only fueled his desire to delve deeper into the dark places so few others would dare tread. Swallowing his last and ordering us both another round of whiskey neat, his eyes are full-on raging wildfire now. Running his hands through his hair, a single wavy lock comes loose from the others and drapes a long black shadow across his left eye. I say very little and let him indulge me with grand tales of bondage, passion distorted, nihilism, Armageddon. I’m pulling off my sweater as he’s pulling back the curtain and all I have to do is sit back and peer in. This one’s a feast. Sipping my drink on this regular day in this no name bar and watching his whole body tell its most intimate stories, I’m reminded of a truth I didn’t even realize I had given up on believing long ago. There are those who admit to their sordid desires and those who do not, but everybody’s got something they don’t want you to see. There are no regular people.